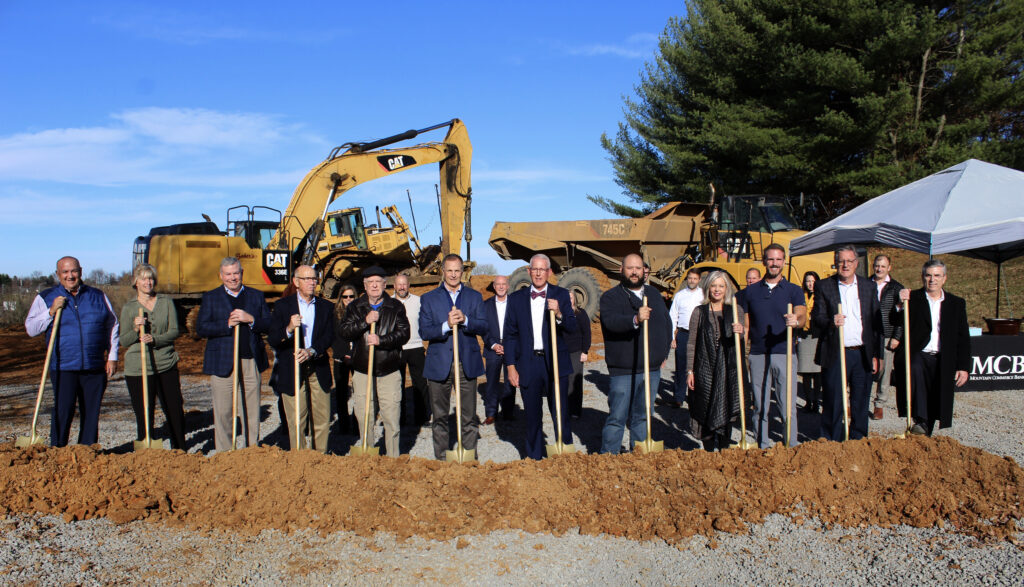 Major construction project caps a flurry of local activity for MCB, including relocation of its Operations Center and introduction of new Interactive Teller Machine (ITM)

KNOXVILLE, TN — November 22, 2022 — Mountain Commerce Bank (MCB), a subsidiary of Mountain Commerce Bancorp, Inc. (OTCQX: MCBI), broke ground at a ceremony on Monday, November 14 for its new Johnson City Financial Center. Construction of the two-story, full-service banking facility at 109 Memory Gardens Road will begin this month and is anticipated to open in mid-2024.

“The new financial center will create a significant presence in Johnson City for Mountain Commerce Bank,” said Bill Edwards, MCB President and CEO, “and will provide a warm and inviting space for our clients to interact with their personal bankers.”

The new building will feature a touch-screen technology station for account access, along with  traditional teller stations and night depository. The center will serve the financial needs of all MCB clients—individual, professional, small business, and commercial—offering a wide range of transactional and deposit products and services, in addition to personal and business loans, and individual investment services.

“I am pleased to begin construction of our new state-of-the-art financial center. It is the next step in MCB’s strategy, “Edwards said.  “We have had great success from very modest beginnings, which is evidence that banking is a relationship business. We are excited that our financial center will anchor a visible gateway to Johnson City.”

“An ITM—sometimes referred to as a video remote teller—offers an ATM-like interface but with a video screen that will enable MCB customers to speak directly to a service representative in real time,” explained Edwards. “Clients can perform simple cash transactions or engage in deeper, more personalized banking tasks. It will give our customers choice, access and convenience.” MCB anticipates the ITM will be up and running in the second quarter of 2023.

The bank is also relocating its Johnson City operations center from Boone Ridge Drive to a new 24,000-square-foot building being constructed at 50 Gray Commons Circle. That move is anticipated to take place at the end of next month.